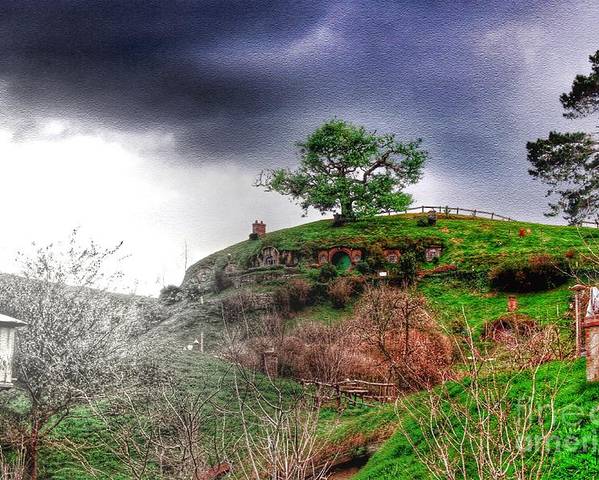 Cloudy Hobbiton poster by HELGE Art Gallery.   Our posters are produced on acid-free papers using archival inks to guarantee that they last a lifetime without fading or loss of color. All posters include a 1" white border around the image to allow for future framing and matting, if desired.

Thanks so much Romuald to feature my artwork in the group Arts Fantastic World. Greatly appreciated!

Thanks so much Pamela to feature my artwork in the group Art District. Greatly appreciated!

The Hobbiton film set was a significant location used for The Lord of the Rings film trilogy and The Hobbit film series. It is situated on a family run farm about 8 kilometres (5.0 mi) west of Hinuera and 10 kilometres (6.2 mi) southwest of Matamata, in Waikato, New Zealand and is now a Tolkien tourism destination, offering guided tours of the set. In 2010 the set was rebuilt in a more permanent fashion for The Hobbit: An Unexpected Journey, filming for which began in 2011. McKellen reprised his role as Gandalf the Grey and was joined on the Hobbiton location by Martin Freeman, who remarked that the site "just looked like a place where people lived and where people worked". Hobbiton was a village on a stream locally known as The Water, a short distance west of Bywater. It had a mill, and there was a small inn called the Ivy Bush at the eastern end of the village, on the road to Bywater. The part of the village on the north of the river was known as Hobbiton-across-the-Water. This inclu...