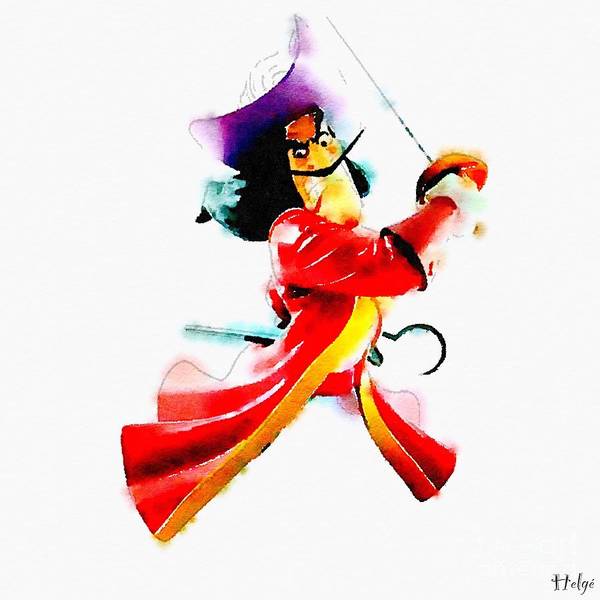 James poster by HELGE Art Gallery.   Our posters are produced on acid-free papers using archival inks to guarantee that they last a lifetime without fading or loss of color. All posters include a 1" white border around the image to allow for future framing and matting, if desired.

Thanks so much Michelle to feature my artwork in the group Collectors Gallery. Greatly appreciated!

Thank you buyer from Solihull, West Midlands. I hope you enjoy this Plush Fleece Blanket for many years.

Captain James Hook (James is sometimes shortened to Jas) is a fictional character: the antagonist of J. M. Barrie's play Peter Pan; or, the Boy Who Wouldn't Grow Up and its various adaptations. The character is a pirate captain of the brig Jolly Roger. He is described as "boatswain to Blackbeard" and "the man that frightened Barbecue", and is Peter Pan's archenemy. His two principal fears are the sight of his own blood (supposedly an unnatural colour) and the crocodile who pursues him after eating the hand cut off by Pan. An iron hook replaced his severed hand, which gave the pirate his name. After getting a taste of Hook, the crocodile pursues him relentlessly, but the ticking clock it has swallowed warns Hook of its presence. The captain of a crew of pirates, Captain Hook has long since abandoned sailing the high seas in favor of having revenge on Peter Pan for ruining his life (Peter having cut off Hook's left hand and fed it to the Crocodile, considering it, by Mr. Smee, a "childis...