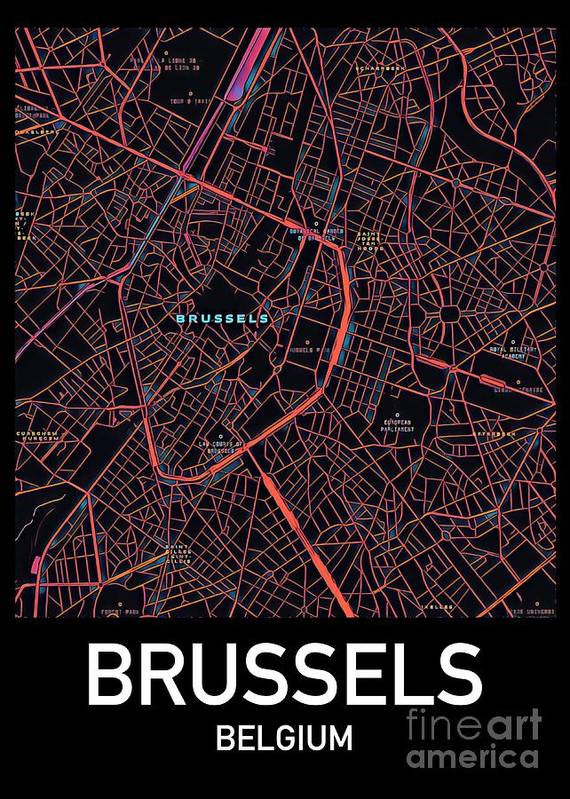 Brussels City Map poster by HELGE Art Gallery.   Our posters are produced on acid-free papers using archival inks to guarantee that they last a lifetime without fading or loss of color. All posters include a 1" white border around the image to allow for future framing and matting, if desired.

Thank you buyer from Belmont, MA. I hope you will enjoy this print for many years.

Brussels Modern Art City Map. The Brussels-Capital Region is located in the central portion of the country and is a part of both the French Community of Belgium and the Flemish Community, but is separate from the Flemish Region (in which it forms an enclave) and the Walloon Region. The metropolitan area of Brussels counts over 2.1 million people. It is the administrative centre of the European Union, thus often dubbed, along with the region, the EU's capital city. As of 2007, there were approximately 50,000 registered non-Belgians in the City of Brussels. In common with all the Brussels municipalities, it is legally bilingual (French–Dutch). Brussels grew from a small rural settlement on the river Senne to become an important city-region in Europe. Since the end of the Second World War, it has been a major centre for international politics and the home of numerous international organisations, politicians, diplomats and civil servants. Brussels is the de facto capital of the Europea...