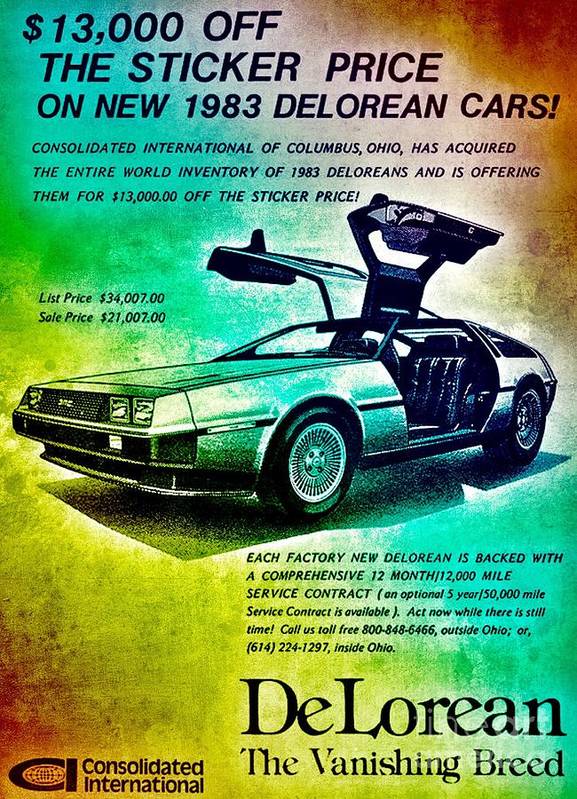 Back to the DeLorean Poster

Back to the DeLorean poster by HELGE Art Gallery.   Our posters are produced on acid-free papers using archival inks to guarantee that they last a lifetime without fading or loss of color. All posters include a 1" white border around the image to allow for future framing and matting, if desired.

This is quite interesting.

Thank you buyer from Coopersburg, PA. I hope you enjoy this metal print for many years.

The DeLorean DMC-12 (commonly referred to simply as the DeLorean as it was the only model ever produced by the company) is a sports car manufactured by John DeLorean's DeLorean Motor Company for the American market in 1981-83. Featuring gull-wing doors with a fiberglass "underbody", to which non-structural brushed stainless steel panels are affixed, the car became iconic for its appearance as a modified time machine in the Back to the Future film trilogy. The first prototype appeared in October 1976, and production officially began in 1981 in Dunmurry, a suburb of south west Belfast, Northern Ireland (with the first DMC-12 rolling off the production line on January 21). During its production, several features of the car were changed, such as the hood style, wheels and interior. Approximately 9,000 DMC-12s were made before production halted in early 1983. The DMC-12 was the only model produced by the company, which would go into liquidation as the US car market went through its largest...